The Attack on Social Justice 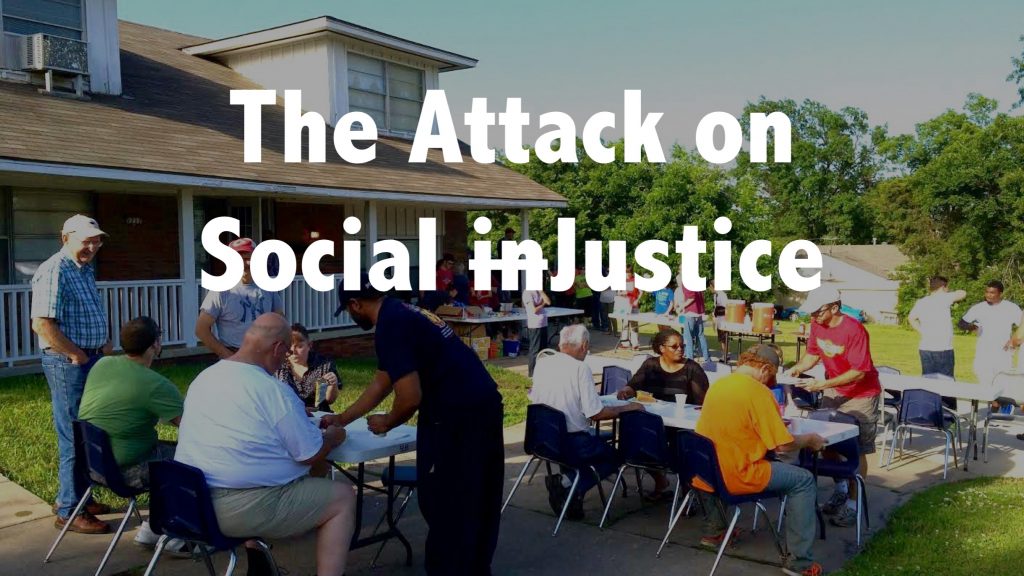 Social justice is a term coined from the church’s concern for the mistreatment of the poor. It’s been around for more than 150 years and recently has come under attack in the headlines. As someone who has felt dismayed by some things written and said, I have three goals here: (1) Warn those who are unnecessarily causing harm to other Christians and explain to them what they are missing. (2) Encourage those who feel attacked to press on in unity. (3) Propose steps for a way forward together, embracing a Biblical tension.

PROMPTED TO LOVE JUSTICE
To follow Jesus has always required lifelong teachability. On any given day his disciples’ worlds would be turned up-side-down by lessons such as:

To deny these teachings is to deny Jesus. So I’m encouraged at the number of churches who continually heed God’s promptings to love their neighbors, especially those they had not noticed or had opportunity to love before: the elderly, the orphaned, the disabled, the refugee, the hungry, the addicted, the unborn, the single parent, the minority, the forgotten, the abused.

As I look back at our church’s sixty-year history, I see how God prompted the church to expand our horizons to care for different groups of people. It’s beautiful how God does that. As our neighborhood has changed and as God has clearly prompted the hearts of our people, we’ve taken intentional steps to obey. This required research (like our food pantry team does), training (like our folks equipped to care for the grieving do), hard work (like those who rake leaves and serve our local school do), and listening (like we all do as we consider issues of diversity and reconciliation). We’ve poured blood, sweat, and tears into these endeavors. But here is what you must know: we look to the Bible as our chief guide and we rely on prayer before any decision. Our conviction about the authority of Scripture can get us labeled as too strict or ultra-conservative. Our greatest hope is for people to believe in Jesus and follow Him. We surely haven’t done everything perfectly, but our motive is to please God.

The four key themes of Biblical justice call for an end to unjust economic structures, unjust domination, unjust violence, and unjust exclusion from community. (See Luke 4:16-19, where Jesus reads Isaiah’s rebuke of all four.)[i]God commands the individual, the group, and the entire society to treat each other rightly and justly – social justice.

So imagine my dismay when I heard a prominent preacher espouse that social justice is the greatest threat to the gospel in his lifetime. He signed a manifesto of sorts and rebuked practitioners of social justice in a series of sermons and blog posts.

This week I’ve been listening to friends who are neck deep in ministry to folks in dire situations.  Every single one of them was aware that some leaders have abandoned Jesus to pursue a warped form of social justice. My friends know that some churches have turned away from the Gospel in order to try to appease people. My friends know that academia is full of Christ-less humanitarian ideologies. However, every single one of the people with whom I spoke feels compelled to labor for true social justice because of the Gospel and under the Gospel.

Submitting to the Lordship of Jesus and the authority of Scripture doesn’t require us to abandon social justice. It moves us to embrace it and shape it.

All this makes me wonder why some people are so compelled to draw a line in the sand on this issue? Why do we have to choose sides? Why has the term been elevated to a matter of essential doctrine? I have a hunch that four things are involved:

Semantics
I prefer to use the term Biblical justice or to leave out any adjective at all. However, adjectives can help us get more specific. Justice in various societal environments doesn’t remove the Bible from justice; it simply applies Biblical justice in that setting. It’s quite possible to care about justice in its social contexts, while not believing that policy changes will bring about our salvation. (Some people do advocate the unbiblical idea that right policies can lead to a utopian society – but the key word there is some.)

People can mean different things when they say social justice. Some are founded in Scripture and some are not. I won’t dare try to list them all, but I can say this for certain: a multitude of people who happily identify as lovers of social justice don’t fit the nasty labels being attached to them. They aren’t race-baiters or proponents of a watered-down Gospel. In fact, most would struggle to give a working definition of critical race theory or contextualization. They just aren’t having those discussions at all, so it’s feels bizarre to be accused of such things. You might live in the clouds of academic or political theory (and we need some people to at least visit those clouds often), but don’t assume everyone else is there.

If you think it’s worth it to come to a consensus about the term social, that’s one thing. But to assign worst-case-scenario definitions to my church, my ministry friends, and countless others is reckless and damaging.

Fear of Works Theology
Some of the fear of a perverse form of social justice arises from a fear of a saved by works theology. The Bible is clear that we are not saved by works. I need continual reminders that I can’t work my way into more favor with God. Mankind has always been prone to try to save ourselves, so I’m thankful for the call to reject a works theology.

Stating one of the above truths without making room for the second might feel easier but it would be less true. Some of the people demonizing social justice have a strong distaste for nuance. They are so ravenous in their fight against a saved-by-works theology that they’ve swung the pendulum away from the Bible’s teaching that real faith can’t stand apart from good works and that the greatest commandment (love God) can’t be removed from the second greatest (love your neighbor).

In their narrow view of the Bible’s teaching, a view that prefers a simplified system of theology above the breadth of Scripture, they’ve stepped onto the same cracking ice of the worst-case examples of those they are attacking.

So should we be concerned about a warped view of social justice? Yes. Absolutely. Paul sure was.

But I’m not near as interested in winning a fight over the definition of social justice as I am with loving people oppressed by social injustice.

I fear the attacks on social justice, especially without distinguishing the difference between the warped and Biblical views, will raise the level of apathy towards social injustice.

Partisan Politics
The more I read, the more I realize that politics is fueling some of this. I saw words like Marxism, liberalism, and identity politics. Then I thought of my Thursday morning prayer group. Most in the group lead ministries in struggling neighborhoods. Most are minorities. All of them love Jesus with all of their hearts and view the Bible as inspired and true. All of them care about justice issues. To suggest their convictions come less from the Bible and more from Karl Marx is lunacy.

I think my Thursday morning group represents the average person concerned for social justice, not the outlier. However, our whole culture is wired to attack any perceived political enemy. It goes like this: “I heard a democrat talk about social justice, so that means it’s a liberal threat to be fought at all cost.” Or more likely, “I heard a politician or pundit define social justice as bad, so I’ll take their word for it.”

We see how partisan politics wags this dog when someone says the church should quit speaking into issues of race or refugees, but then says the church should protect the unborn. Or vise-versa. Sean Palmer wrote, “When someone says, ‘We need to just focus on preaching the Gospel and saving souls,” that’s code for, “I don’t care that much about this particular issue and don’t think you should either.’”

I acknowledge that there is a political stream pushing for leftist ideas in the name of social justice. I’m just not willing to give them the copyright of the term or to lump the rest of the social justice world in with them.

It’s a scary time when Christians echo the pundits of right wing radio or left wing TV before even taking the time to ask a person what he or she means by saying they support social justice.

Grandstanding
We need prophets – people to proclaim the truth and warn us about dangers. But prophets aren’t abdicated from the responsibility of proceeding with accuracy and compassion. Some folks, in the name of being world-saving prophets, might just be grandstanding here. They are tossing red meat and their tribe is rallying around them. They are building a straw man and inviting everyone to watch him burn.

I don’t think this is what’s driving all of this outcry, but I will tell you that the grandstanders often end up in the spotlight.

REALITY
Here’s the reality of what the current attack on social justice has accomplished.

MOVING FORWARD
So how can we move forward? James 1:19 has the answer:

In doing these things, we can work towards a Biblically-formed view of justice, and we must proceed in a Christ-like manner.  Clothed in compassion, filled with gentleness, and overflowing with kindness, let’s move forward. Together.

I commit to doing these things. I know I have a lot more listening and learning to do. And I hope I haven’t posted this too soon. I’ve been working through this for two weeks and I hope you’ll know my motive is to encourage and help the church. [i]See Mending the Divide by Jon Huckins and Jer Swiggart for helpful study of this.