The Characters of Great Stories (and Parables) 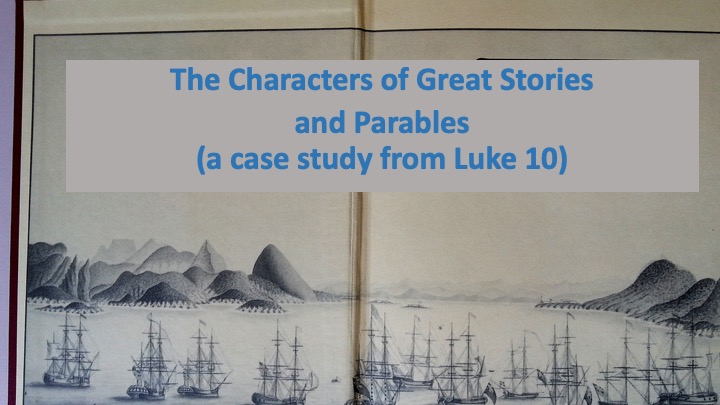 Most stories (whether good or bad, fiction or nonfiction) contain a similar set of characters. Jesus’ Parable of the Good Samaritan (Luke 10) uses five of these classic characters. I challenge you to examine them and then consider the stories at play in your own life.

Context
Asking a preacher what one must do to be saved is like setting a fat baseball on a tee and handing the preacher a bat. There’s just one exception: sometimes the question is less about sincere curiosity and more about an attempt to justify one’s sin. When an expert teacher asked this question to Jesus, he was attempting to wiggle out of the whole “love your neighbor” thing. Jesus answered him with a parable that’s been reverberating through hearts, churches, and entire communities for two thousand years.

In reply Jesus said: “A man was going down from Jerusalem to Jericho, when he was attacked by robbers. They stripped him of his clothes, beat him and went away, leaving him half dead. A priest happened to be going down the same road, and when he saw the man, he passed by on the other side. So too, a Levite, when he came to the place and saw him, passed by on the other side. But a Samaritan,as he traveled, came where the man was; and when he saw him, he took pity on him. He went to him and bandaged his wounds, pouring on oil and wine. Then he put the man on his own donkey, brought him to an inn and took care of him. The next day he took out two denarii and gave them to the innkeeper. ‘Look after him,’ he said, ‘and when I return, I will reimburse you for any extra expense you may have.’

“Which of these three do you think was a neighbor to the man who fell into the hands of robbers?”

The expert in the law replied, “The one who had mercy on him.”

Jesus told him, “Go and do likewise.”

1. The Victim
Jesus never blames the victim. Maybe it wasn’t a safe road. Maybe it was foolish to travel alone. Maybe, but the victim receives no blame. He’s just a helpless victim. Have you ever withheld grace from someone because, well, they had it coming? Do we need to be reminded that without God’s grace, we all have it coming?

The victim accepted help, which we can’t take for granted. He could’ve said, “Just let me die,” or, “I’m fine.” Receiving grace is often harder than giving grace. The victim chose to graciously accept the help which he so obviously needed. If he had not, this story would’ve ended right here. Lots of stories end before a Samaritan can be good.

2. The Perpetrators (Antagonist)
The perpetrators are vicious robbers. How had they become so terrible? Was their entire life just about survival? Were they products of a broken system? Had they just learned from their family? Did they even have a family? Were they another example of how hurt people hurt people? Did they know better but chose rebellion?

The robbers failed to see the value, dignity, and worth of the victim, but you don’t have to rob someone to feel this way about another human. Jesus warned against anger, not just murder, in the Sermon on the Mount. Suddenly I must ask, “Am I the perpetrator?” Thankfully, even though we don’t see it in this example, grace can intervene, even in the life of perpetrators. People can change.

3. The Complicit
Jesus’ audience would’ve been relieved to hear about a priest or Levite coming upon the crime scene. They were the good guys of Jewish stories. But not this time! Both men did three things:
1. Saw the victim.
2. Passed by on the other side of the road.
3. Went on their way.

They could not be blamed for the initial crime, but they became complicit in the injustice when they did nothing. The book of James calls this sin.

The priest and Levite both moved to the opposite side of the road. They wanted to stay as far away as possible.

It’s easier to walk in ignorance of the problems around us. Is there a group of people close to your heart, but whom most others ignore? It drives you crazy, right? Others might say, “I don’t see the big deal. Because I don’t see a problem, there must not be one.” But you are thinking, “It’s because you keep walking on the other side of the road. If you’d walk with me, it would become really obvious. You’d trip over the bleeding victims on the street and you’d suddenly care about the injustices they face.”

4. The Good (Protagonist)
Jews hated Samaritans. They considered them half-breeds unworthy of justice or care. Jesus’ audience may have expected the Samaritan to see if the robbers left any of the victim’s belongings on the ground or to further wound him. Instead, the Samaritan shows tender compassion, physical strength, available resource, and wise planning as he cares for the man. It’s a model example in crisis intervention.

The Samaritan doesn’t just give him a bandage, he shoves his own agenda to the back-burner. He probably was busy, but now everything changed. He treats the injuries, places the injured man on his donkey, and he walks to an inn where he cares for him overnight.

The man is in no condition to travel, so the Samaritan pays for his lodging in advance and says, “I’ll be back to pay for any other expenses that come up.” In other words, “Don’t let money prevent you from taking good care of him. Care for him as I did.”

Think of the person or people you most despise. If Jesus was telling you this parable, the person you thought of would play the part of the Good Samaritan. That’s the shock-level. Don’t miss the good done by the people you think incapable of being good.

5. The Helper
Most good stories include behind-the-scenes helpers who receive very little attention. We don’t call this The Parable of the Good Innkeeper, but he played a vital role. Without helpers/sidekicks/companions/supporters, many good deeds would be left undone. Be willing to be part of the supporting cast of good works.

Others
Two others characters make appearances in many stories. Skeptics are often acquaintances of the Good, but they impede good deeds with their negativity. It’s easy to imagine a skeptic telling the Samaritan: “You can’t help him,” or “He’ll get beat-up again next week.”

Mentors give wisdom and encouragement to the Good. We can imagine a mentor asking, “How can you assure the victim’s needs will be met tomorrow?” We hope their voice overpowers the voice of the skeptic.

Who are you?
Who are you in the stories in your world? Are you one of the above? Could you move from Complicit to Helper? Skeptic to Mentor? Perpetrator to Good? Hey friends, did you know I wrote a book?
It’s been helping lots of people, families,
churches, and organizations. You can
buy one here.