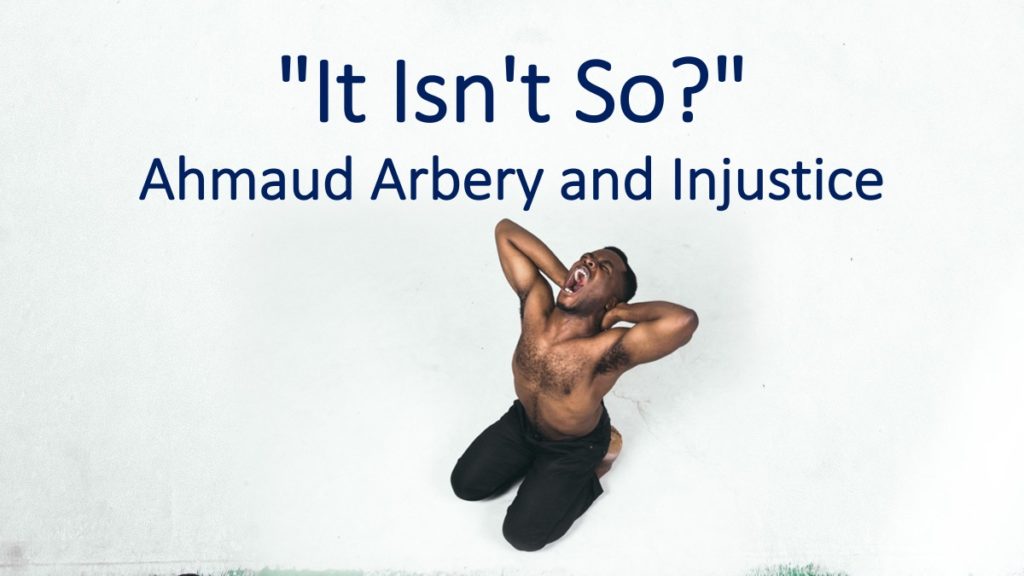 When David told Jonathan that King Saul, Jonathan’s father, was trying to kill him, Jonathan dismissed him. “It isn’t so,” he said. It was impossible for Jonathan to believe that his own dad would try to kill David, his best friend and a faithful servant of Saul. Never mind the times that Saul hurled his spear at David. Never mind Saul’s recent attempt to assassinate David as he slept. Never mind that Jonathan had one time told David, “My father is looking for a chance to kill you” (I Sam. 19:2). Never mind all of that.

A lot has already been said about the killing of Ahmaud Arbery. If you want a detailed analysis of the events, start here. I cried when I saw the video of his body crumple to the ground. Then I reflected in despair, “Would any semblance of justice move forward without the video being released publicly (the local authorities were seemingly prepared to sweep the whole thing under the rug until the video found its way online)? And how many other crimes have been swept under the rug because no such video was taken or released?”

Yes, we want a fair trial with uncovered facts and witness testimony, but it shouldn’t take public pressure (and professional shame) to get us there.

If you lived in that town, with memories of racial violence and mistreatment, with fears passed down for generations, with awareness of some of the prejudice around you, what would you feel? You might feel fear. And what you might hear back from those not in your shoes is, “It isn’t so.”

Over a thousand miles north, dozens of protestors armed with sem-automatic weapons marched into the state capitol in Michigan. Some shouted and tried to intimidate. A confederate flag waved outside. A sign menaced, “Tyrants get the rope.” Can you imagine the response if those protestors were people of color, Muslims in full garb, or twenty-year-old men wearing hoodies?

I keep thinking about the picture of a female senator whose husband strapped a bullet-proof vest on her before she left for work that morning. If you were her, reading those signs, hearing those shouts, seeing those guns, what would you feel? You might feel fear. And what you might hear back from those not in your shoes is, “It isn’t so.”

A few months ago, I was riding back with two preacher-friends from an incredible day at a conference at Ozark Christian College. One of those friends alluded to something bad that happened to him while he served as a fireman. I didn’t quite understand, so I gently pressed for more. For the next hour, he talked about the severe discrimination he faced. He was never called by his real name for the first year, but the N-word was routine. He was passed over for multiple promotions that he deserved. He wouldn’t dare sleep at night in the station.

I don’t know how he did it, how he persevered, how he didn’t get revenge, how he’s such a grace-filled person. Well, I guess I do know. He’ll tell you about God’s constant work in his life.

I was amazed by three things during that drive: 1-His character. 2-That this survivor of such chilling mistreatment was sitting in my car, still alive, still here, not someone that I’d read about in a history book. 3-That a little slice of my soul wanted to say, “It isn’t so.”

I know several firefighters who are Godly, kind, wonderful people, but that doesn’t make my friend’s story “not so.” It does, however, make his story incredibly inconvenient for my worldview.

I’ve never been mistreated like that. I’ve never been overlooked at work because of the color of my skin. I don’t carry the trauma that gets passed down through generations. My grandparents didn’t lose homes, businesses, and loved ones in the Tulsa Race Massacre. I don’t live with racial fear, so I want to say, “It isn’t so.”

Did you know the first slaves arrived in America at least 113 years before the birth of George Washington (and maybe much earlier)? That boggles my mind for some reason. The African American experience in this land includes 250 years of slavery—horrific violence, rape, the ripping apart of families, and dehumanization. Then there were 100 years of legal discrimination, unpunished lynching, and maximized inequality. Now we’re barely 50 years into a time of some improvements, some legal recourse, some setbacks, and some strides—both great and small. It’s looking like you can’t undo 350 years of abuse in one generation.

The roots of racism go deep and far. The history of racism in America doesn’t make the nation worth discarding or hating. The history of racism in America, regardless of your color or family tree, doesn’t make you a bad person. However, it does make you a foolish person if you ignore it. I put it this way in my book: “It feels as if we are forced to make a tiresome choice between two non-existent Americas: One that is irretrievably and unforgivably racist, and another where there is no racism, discrimination, or privilege at all.” The second part of that extreme is “It isn’t so.”

Almost anything is better than dismissing the fears of another by saying, “It isn’t so.”

“It might be so” at least allows room for discovery, investigation, listening, and learning.

“I hear you, and I want to learn more” at least salvages the friendship.

“It isn’t so” flatly rejects both the person and the problem.

When I’ve had a deep conversation with friends about racial injustice I’ve heard firsthand, they’ve sometimes said, “It isn’t so.” They aren’t trying to be mean. In fact, they usually try to be quite polite about it, but they aren’t going to let the “stories” of another change their perception of reality. It’s just too painful.

Don’t feel sorry for me, but weep for the victims tossed aside, silenced, and ignored.

Don’t ignore the beaten man on the side of the road because what happened is not your fault. Instead, be a Good Samaritan because you are your brother’s keeper, he is your neighbor, and he is your responsibility.

My beef with Jonathan is that he failed to trust his honest, honorable best friend. Why would he doubt a friend without any reason to do so? Because it would complicate his worldview and his life.

After the initial dismissal, David took an oath, explained Saul’s motives, and exclaimed, “There is only a step between me and death” (I Sam. 20:3).

Props to Jonathan. He relented. His humility and true character emerged. “Whatever you want me to do, I’ll do for you” (I Sam. 20:4). He followed through with an elaborate plan to save David’s life, even if it jeopardized his own.

Jonathan’s change of mind is as commendable as it is rare. We’re not so great at changing our minds, even if the evidence begs it. And if we state our opinion on a matter publicly, we almost never change our minds. Suddenly, we subconsciously work to defend our original statement, even if it costs us every shred of dignity.

So where does this leave us? Let me offer a few ideas:

To those grieving, I’m sorry. I’m with you.

If I frustrated you with this post, I hope you can allow it to be constructive. And I hope you’ll offer me grace.

If you have helpful resources to share, encouragement to give others, or would like to offer a prayer, the Comments section is yours.

*Thanks to LeRon West for giving his input and blessings in this post. Thanks to Amy Storms for her valiant proofreading. Thanks to mwangi gatheca on Unsplash for the cover art.